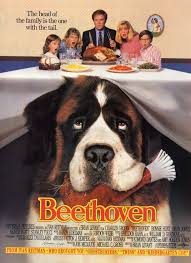 puppy named after the famous composore 'Beethoven' and owned

by the Newton family.

The father of the family was not keen on being a Saint Bernard owner,

The film was followed by six sequels. Only Beethoven's 2nd was

released to the big screen, and the rest was made for videos.

A Saint Bernard named Chris was the first dog to play Beethoven,

Starring in Both Beethoven and Beethoven's 2nd.  Chris was trained by Karl Lewis Miller, who also

worked with animals for films such as K-9, Babe, and Cujo.  Although the original Beethoven actor

passed away shortly after making the second film, the Beethoven series contiued on with additional

sequels: Beethoven's 3rd and all the rest. In these films, other Saint Bernards fille Chris's shoes.  There

were actuelly 3 dogs that appeared in Beethoven's Gig Break -Benz, who permofmed the majority of

the tricks, Dolly who handled scenes involving the puppies, and Boomer who was cast for his drooling

and 'nastier' action scenes.  Cesar Millan also made an appearance in the film.