The dog Nana in James M. Barrie's Peter Pan was a St. Bernard, even though some sources depict

it as Newfoundland. Ofcourse Newfie owners resent the depiction of her as a St. Bernard in the

Disney animated film version;  and in the 2004 film Finding Neverland  a Great Pyrenees was used.

Non the less, Nana is a St. Bernard who appears in Disney's  1953 animated film about PeterPan.

She is nursemaid who help the Darling children to tuck their beds before Mr. and Mrs. Darling

Originally Nana was given a much larger role. She was intended to journey to Never Land

alongside the Darling children and have a comical subplot chasing after Tinker Bell. Nana was

beloved character from the film. 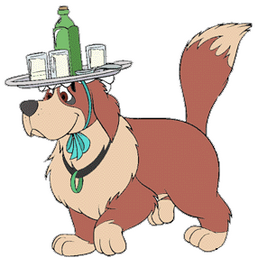 Nana is very caring the Darling children and treats them as her own pups.

The children cherishes Nana as an important family gem. When Nana was

for the Darlings. Even when George Darling took her to the dog house, he

felt sorrow after seeing Nana's saddened face. Nana is in charge of the